It’s been almost six months since our SEL Assessment Guide launched and we are very excited about our success with engaging users and impacting practice. In this week’s blog, we’ll share what we are learning about how many users we are reaching, who our users are, and what they are saying about their experience with the Guide. 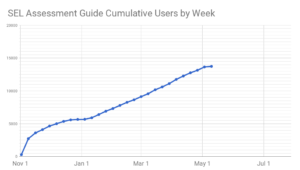 Thanks to the magic of Google Analytics, we might learn some useful things by exploring what users search for and what filters they use in the Guide’s measure catalog. For example, these data tell us that student self-report (37% of users) is the most frequently sought after type of measure, followed by teacher/staff report (30% of users), performance measure (19% of users), and then family and peer report (each less than 10% of users).

These data also tell us that users are searching for assessments for elementary-aged students (54% of users) far more than middle (21%) or high school (25%) students. This is not surprising, since the field is less developed at the secondary level, both from a programmatic and assessment standpoint.

Another interesting trend in the data: the top four most frequently searched SEL competencies, as well as seven of the top ten, are focused on the “self,” rather than the social aspect of SEL.

Upon registering to use the Guide, approximately 70% of users give us consent to follow-up with them for feedback about the Guide (*which we greatly appreciate*). A feedback survey is subsequently sent two weeks later to users that provide consent, to which more than 200 users have responded.

From these data, we’ve learned…

Based on these data…