Attitudes are especially important to a young person’s wellbeing.

The iceberg model above illustrates the powerful influence that attitudes have on how young people, think, feel, and behave. Much of my work with young people has focused on helping young people to become aware of and re-structure their negative attitudes into positive ones –this does a lot to help eliminate or reduce in frequency and intensity their emotional and behavioral difficulties as well as promote highest levels of wellbeing.

You know how important self-talk is to student wellbeing but have you ever wondered what determines their thinking/self-talk and whether it is helpful or harmful? The answer lies at the core of student mindset – at the bottom of their iceberg – their attitudes. These determine students’ self-talk.

For example, bullying has the potential for significant emotional harm; but so too, do individuals have the potential to be less vulnerable and more resilient towards bullying and its effects. What is now abundantly clear is that a student’s attitude about bullying largely determines the effect of the bullying on their self-talk and resultant emotional and behavioural response.

Two girls receive the same cyber-message on several occasions saying that each has been fooling around with a popular boy at a school party and that the boy’s girlfriend is on the warpath. Carmen is quite devastated; feeling extremely depressed about the impact of the message on her reputation, while Alex pays little attention to the message, reminds herself that she is a worthwhile person, and returns an SMS saying that the sender’s spelling stinks.

It is clear from research and clinical work with children, adolescents, and adults who have been bullied that at the root of their helplessness, despair, depression, and rage is their tendency to take bullying behaviour personally because of their attitude of self-depreciation: ‘Because I am being picked on, there must be something wrong with me. I must be a real loser. This is awful, I can’t cope.’

My work as an educational psychologist in schools and as founder of You Can Do It! Education (YCDI!) has involved counselling students with social-emotional difficulties as well as writing social-emotional learning curricula for use with young people of all ages. In our online curricula programs, we have designed different YCDI! Lifesavers such as the Worry Lifesaver below that help students to develop the self-talk (and coping skills) that help them re-structure negative attitudes and self-talk. 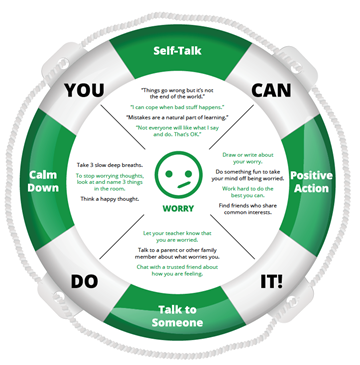 Implications for assessment and data use.

Whether working with individual students, classes or schools, it is very useful to gather data on student attitudes in order to sharpen the focus of a school’s SEL or well-being program onto those specific negative attitudes that are especially prevalent for the individual or group. Similarly, if data reveals a group of under-developed positive attitudes, school and classroom discussion and activities can be chosen accordingly.

Over the past 15 years, we have collected data on SEL and attitudes of over 135,000 students Australia-wide employing the ACER Survey of Social-Emotional Wellbeing (www.acer.org/au/sew) in order to better understand common attitudes and changes in feelings. For example, from 2003 to 2017, worrying too much about schoolwork or what others think has gone from 44% to 58%. (See: Bernard, M.E., & Stephanou, (2017). A. Ecological levels of social and emotional wellbeing of young people. Child Indicators Research. DOI 10.1007/s12187-017-9466-7). We need to understand and be responsive to these factors in our SEL work.

Another way to collect data on attitudes is through the use of surveys that students and/or teachers complete (e.g., we use the Survey of Student Attitudes). Another less formal way to collect data which we often use when conducting professional development with teachers is to present to the collective group matched pairs of positive and negative attitudes (e.g., Giving Effort vs. Giving Up) and determine which attitudes teachers as a group say are either under- or well-developed in their student population.

Distinctive to our work overall and as reflected in this blog are two key principles:

How might these principles influence the way you work with young people or help others do so?

For additional information and copies of surveys contact: michaelebernard@gmail.com; enquiries@youcandoiteducation.com.au

Founder, You Can Do It! Education

Disclaimer: The Assessment Work Group is committed to enabling a rich dialogue on key issues in the field and seeking out diverse perspectives. The views and opinions expressed in this blog are those of the authors and do not necessarily reflect the official policy or position of the Assessment Work Group, CASEL or any of the organizations involved with the work group.